This time, we will be introducing a pachinko machine of “Symphogear”, which its latest anime series of “AXZ” is currently being aired.
Its original story is about a battle against an alien race called “Noise” by using an armor alled “Symphogear”.
Renditions and songs by famous voice actors such as Aoi Yuki, Nana Mizuki and Miyuki Sawashiro is a must see!!
Also, one of the most important renditions is called “Zessho”. Players have huge chance of winning once this rendition occurs!!
It has already made its debut on October 21st.
Let’s see the actions of girls at the parlor. 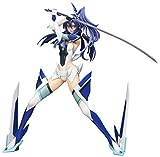